The first bridal shower that my maid of honor and bridesmaids have ever attended – and therefore organized -was mine this past weekend. But you would never have known that. Because they absolutely killed it.

I couldn’t have imagined a better shower. The day went something like this: my MOH, Negin, and two bridesmaids, Emilie and Kamelia, drove down to my home town, the dairy capital of Canada, (pausing, for laughter), and no, I’m not joking, you can see them below with the statue of the cow, the Woodstock flag (yes Woodstock has a cow statue and its own flag) flying high above it 🙂 (more laughter can now ensure). 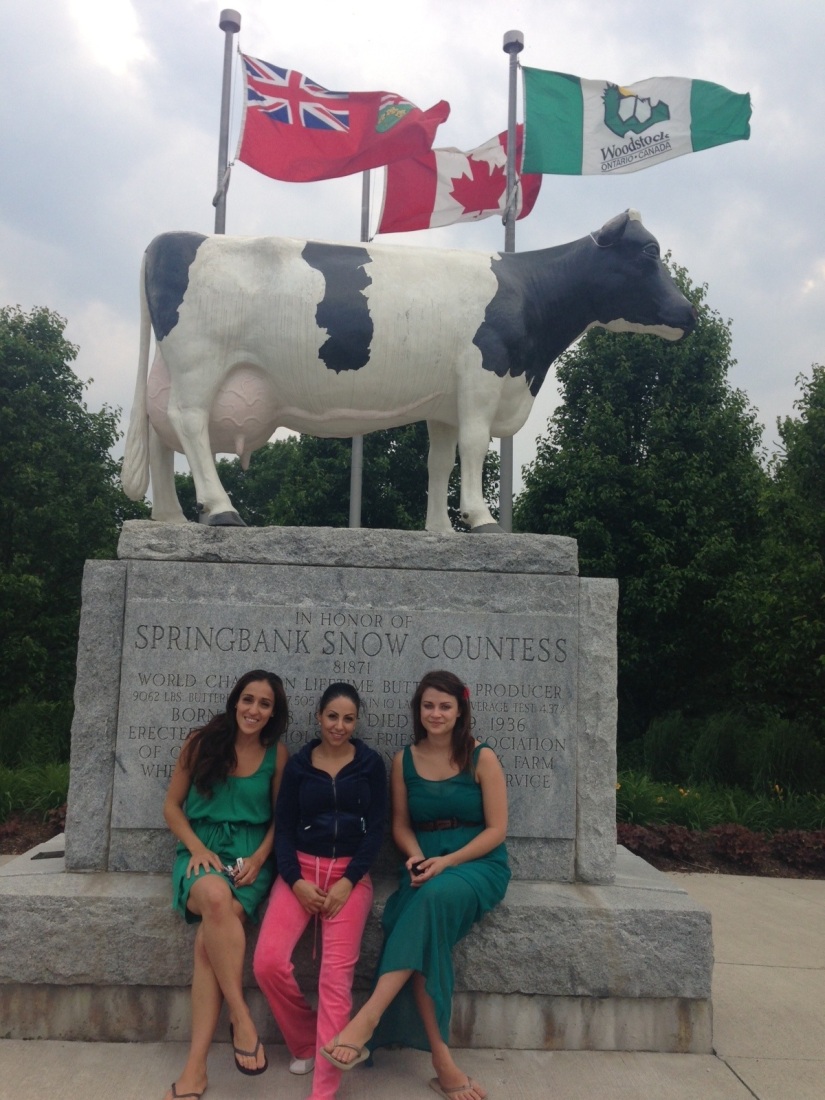 When they arrived at around 10:30 a.m. I was fresh out of the shower and starting to get ready upstairs. I could hear them scurrying about downstairs and my curiosity was peaked as to what exactly they were doing! Earlier that morning I had gone downstairs to help set up the main table (I couldn’t help it! Call me bridezilla, I don’t care! Lol) but I had only really arranged the fine china tea cups because my sister was making all of the sandwiches for the high tea that morning and would be the one arranging the food.

So, upstairs I was while my friends were busy preparing the living room and kitchen for the shower! Kamelia, one of my bridesmaids, came upstairs to do my hair (which she’s amazing at!) she curled it all in a 1950s fashion to go with the dress that I had bought especially for my shower from Cabaret Vintage on Queen West.
La dress: 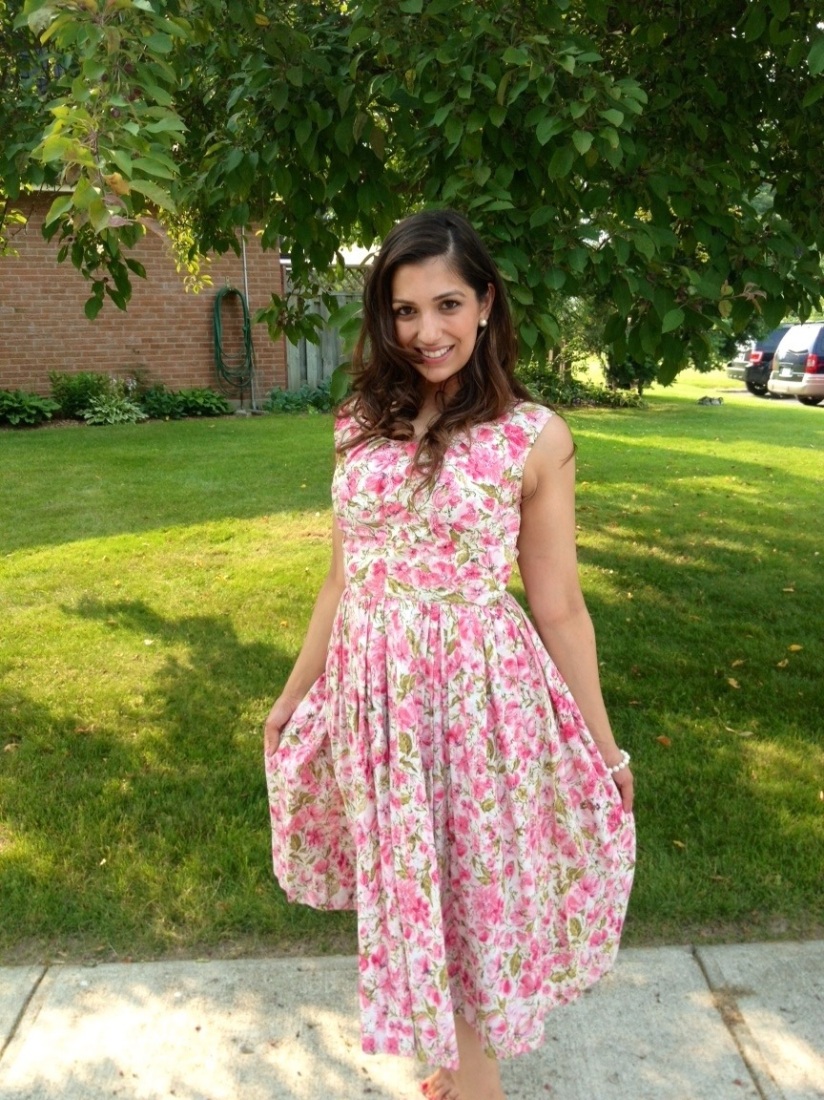 After Kamelia finished making my hair look beautiful, and I was allowed to go downstairs I saw: pink and white balloon decor and tissue hanging from the ceiling of my living room, a table spread of old Victorian looking teacups, the tea pots which my nani amma (grandmother) had given my mom in her Jahez (wedding dowry), 3 tiered platters of my sister’s hand-made high-tea sandwiches, two cakes – one chocolate with a pink peony flower as decor and a pink ombré cake – which I later found out was made by Emilie herself (prior to she was a baking virgin, and look how beautiful it is below!) a bouquet of pink tulips, daisies and roses which my mom has bought the morning of, my mom’s tea trolly laid out with colorful craft supplies and a fun table in the kitchen full of candy in martini glasses, and a table in the hallway lined with favors.

Everything looked spectacular. (The pics below we’re taken just after all the tea cups were taken off the table so you’ll have to imagine those on the table!) 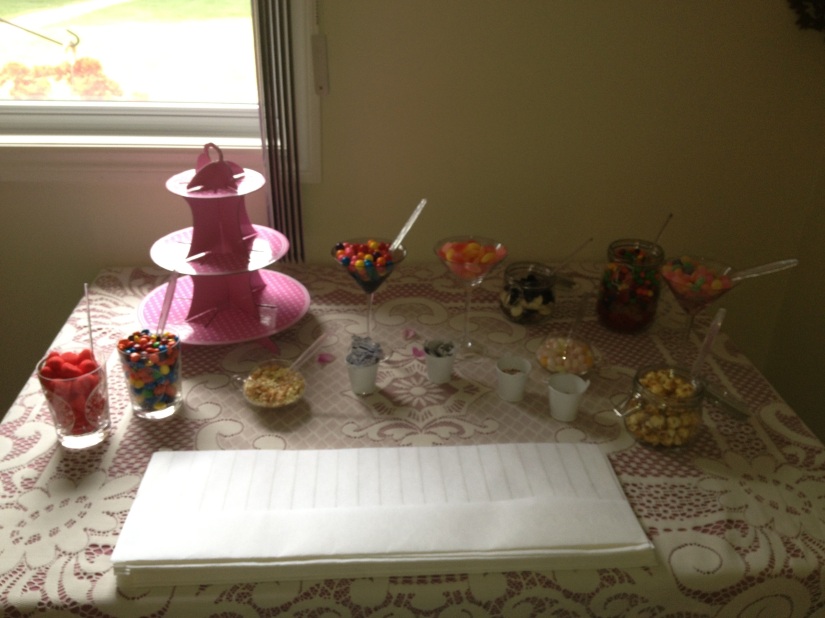 The afternoon started with my normally very undomestic friends transform into Martha Stewart reincarnations, asking all of the girls how they liked their tea, pouring the tea into the pretty floral teacups (we’ve deemed them all ready for marriage), making 3 signature drinks, including: a fun orange drink they adorably named “the mehndimosa”, a chocolate concoction made with ice cream which they labelled “chocolatesaftini” and a lovely pink drink which my mother re-named “the bridezilla” – lol, sigh.

Yes, the girls took their hosting duties quite seriously, instructing the guests on how to participate in fun competitions they came up with which ranged from cupcake decorating to making a sari out of colorful streamers! (Both of which I was happy to judge!)
Also, given that I work in the field of diversity and inclusion, I was so proud of their cultural competence – taking that white toilet paper dress game to a whole new culturally relevant level! 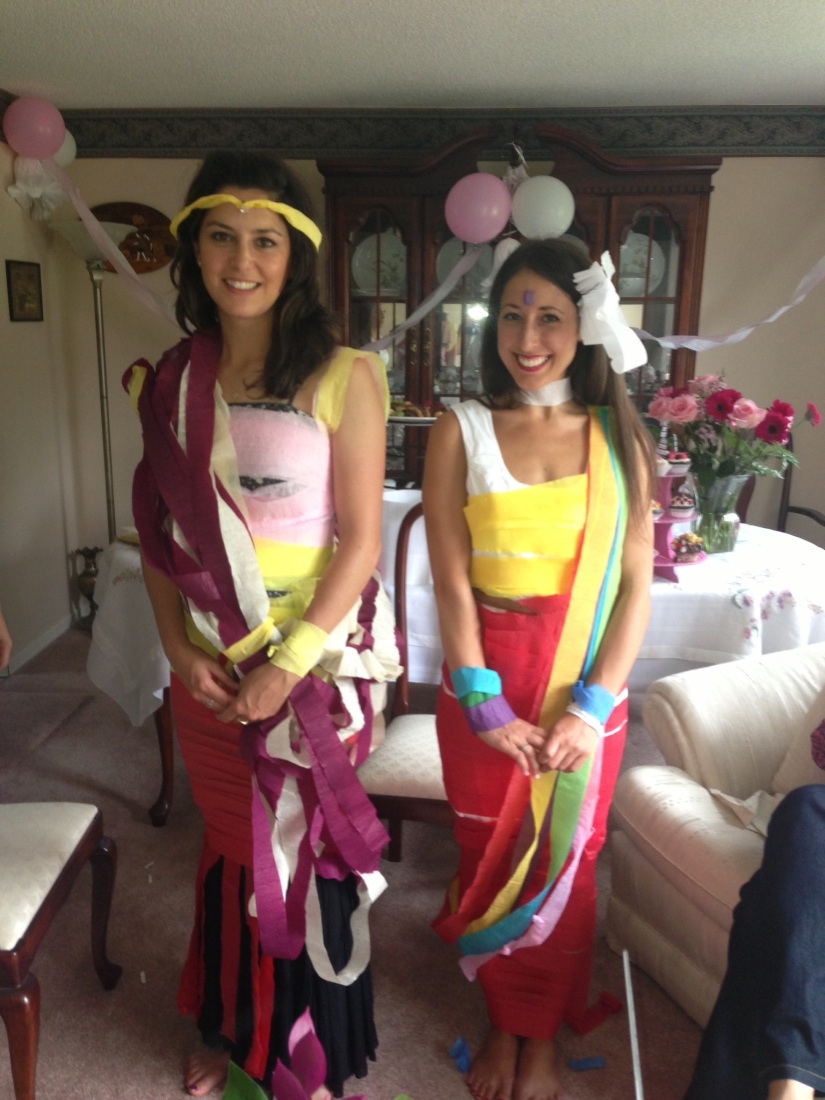 It was at this point in the afternoon that my fiancé made his grand entrance, bouquet of flowers in hand, right in time to cut the cake and open gifts together. (Did I send my fiancé the anatomy of a bridal shower by Martha Stewart prior to my shower which discussed how the fiancé making an appearance at a shower is a revived tradition? Lol, why yes, perhaps I did. :D)

Before my fiancé and I cut a cake, my MOH and I did first – I felt it only right, after all she’s been my life partner for so many years! 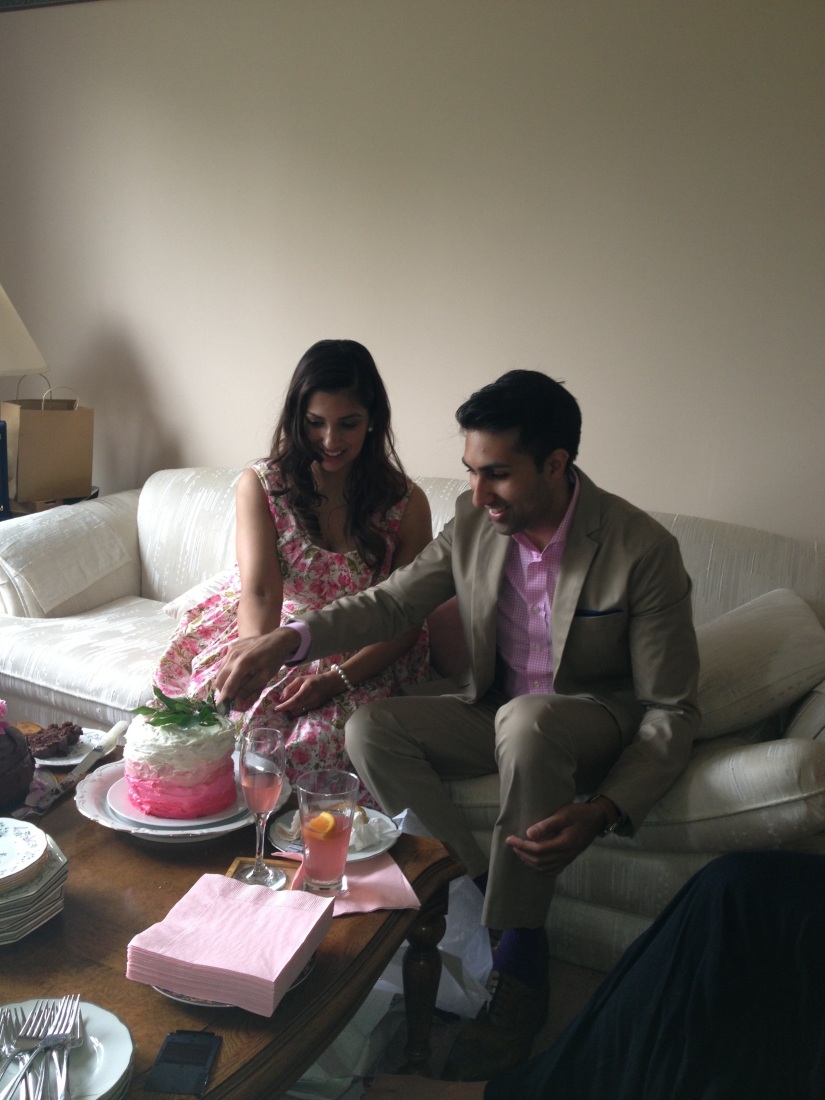 The ombré cake tasted just as good as it looked and opening the gifts together was a lot of fun: my kitchen will now be equipped with cooking aides, lol. One of the girls Courtney brought me the cutest oven mitt – black foam with a huge diamond stone on the outside finger – tres adorable. 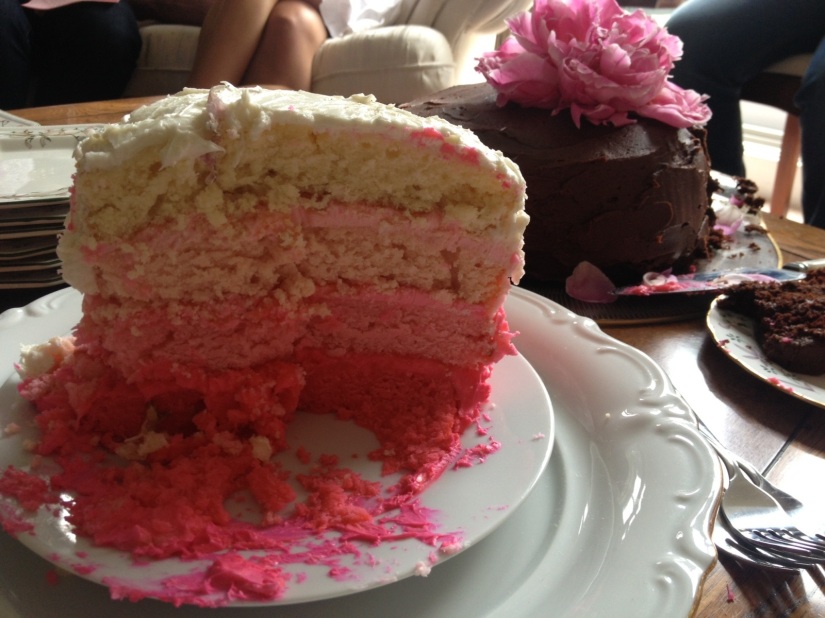 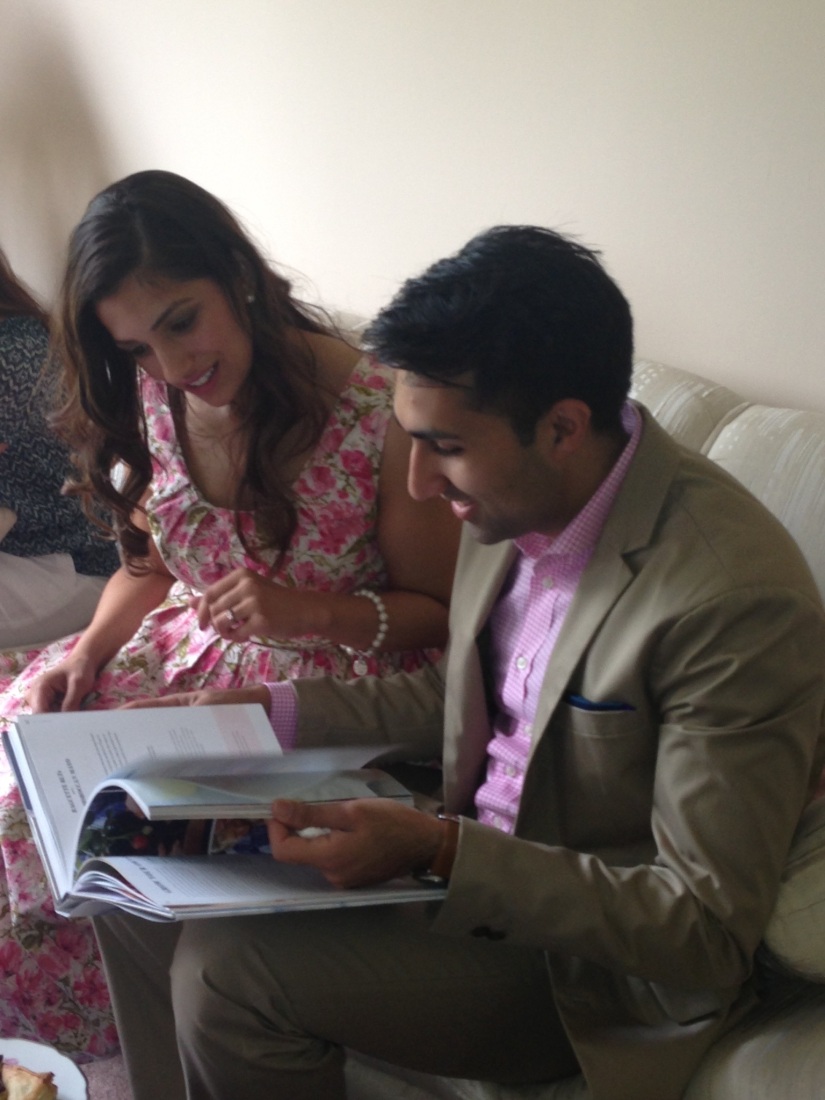 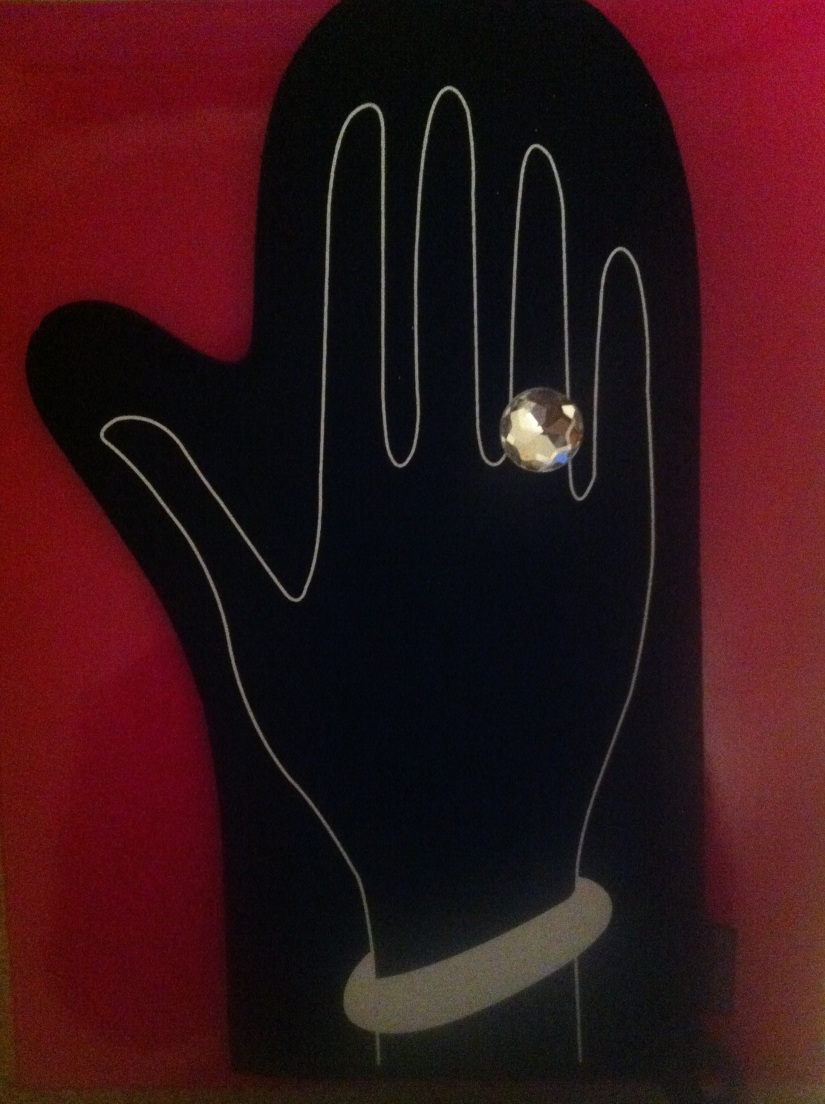 The cherry on top of the cake(s) at my shower was the beautiful video that my bridesmaid Kirsten put together for me, so that the girls not in Ontario could also be part of it all. The video featured many of my girls talking about their favourite memory, their wedding wish for me….all sorts of kind words which brought tears to mine and my mom’s eyes. So, I was very happy to see that the video ended with outakes – featuring one of my bridesmaids, Kamelia, rapping, mine and SM’s love story…. In Patois. And you thought it couldn’t get better!

Last but not least the favours that the girls chose to give away were an ode to my true love for ice cream – ice cream scoops, or as Emilie said, “a scoop of love.”

All in all, I felt overwhelmed with love at my bridal shower! Thank you to my mom, my sister, my friends and cousins!

I feel so incredibly lucky and loved to have such amazing women in my life. And this is the thing: it may be hard to find a good guy- but its even harder to find good girlfriends – and I think as a woman if you’re lucky enough to find those first, you’re way way ahead of the game! 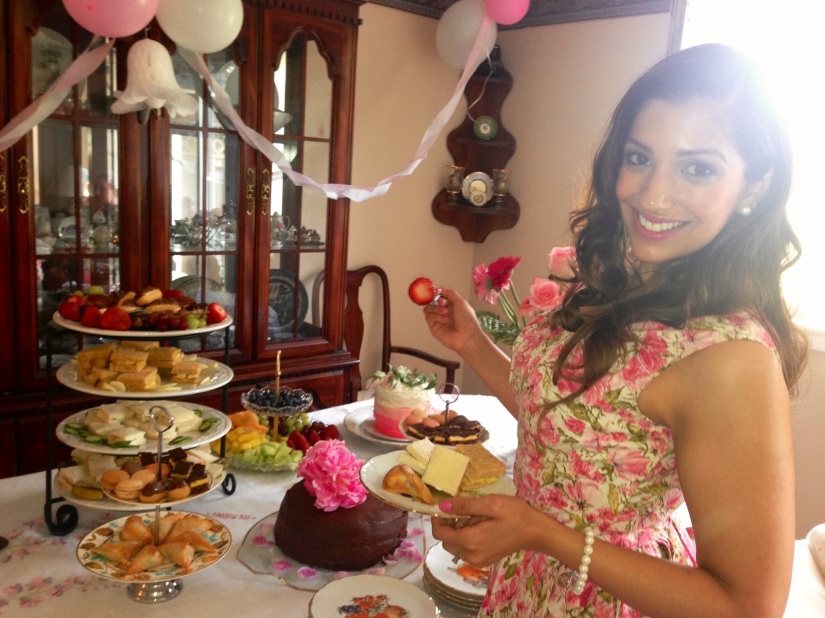 View all posts by safazaki2013

3 thoughts on “The Story of My Bridal Shower”